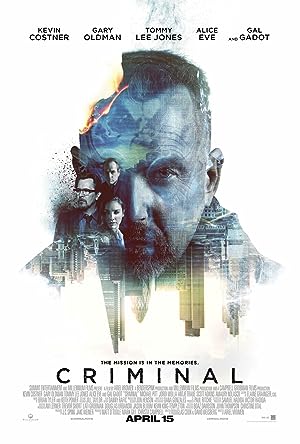 Plot: In a last-ditch effort to stop a diabolical plot, a dead CIA operative's memories, secrets, and skills are implanted into a death-row inmate in hopes that he will complete the operative's mission.

The 4K UHD disc offers no supplemental material, and the score above reflects that lack. The standard 1080p Blu-ray included in this package has the same supplementary material detailed in our Criminal...

Criminal 4K is yet another in the (slowly) expanding universe of 4K UHD releases that may leave some early adopters wondering "Why this film?" A meandering science fiction premise doesn't really provide...

4K UHD enthusiasts with nothing better to watch may want to check out this disc, but it's in what I would term the second tier of recent 4K UHD releases, meaning it's perfectly competent but nothing special...

'Criminal' makes a run for it on Ultra HD Blu-ray with a capable and respectable HEVC H.265 encode in HDR10 that goes pretty far with several triumphant feats worth appreciation. However, it doesn't quite...

The sci-fi spy drama takes aim and hunts down his target with the same thoroughly enjoyable DTS-HD Master Audio soundtrack as heard on the Blu-ray. From the opening moments, the design generates a terrifically...

Criminal Intent (HD, 40 min) — A two part featurette that can be watched separately or sequentially, and the two are made up of cast and crew interviews talking endlessly about the production, performances,...

'Criminal,' the latest action thriller from Ariel Vromen, Israeli-born director of 2012's excellent biopic 'The Iceman,' pulls the rug from under the audience in its opening moments with a monster MacGuffin...

'Criminal' is the latest action sci-fi thriller from director Ariel Vromen that relies heavily on a few MacGuffins and a premise that's frankly silly. But in spite of that, the production manages to pull...