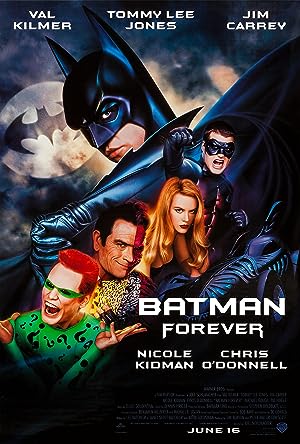 Plot: Batman must battle former district attorney Harvey Dent, who is now Two-Face and Edward Nygma, The Riddler with help from an amorous psychologist and a young circus acrobat who becomes his sidekick, Robin.

Batman Forever was shot using Panavision Panaflex Platinum cameras on 35mm film and has recently been cleaned-up and scanned at 4K, the result of which has been used for this Ultra HD Blu-ray release....

The re-mixed Dolby Atmos track really goes all out to envelop you in the surround experience; right from the opening credits (the swooping of the names sweep right over your head) to the opening heist,...

Riddle me this, riddle me that, who's afraid of the big, black bat? So, this was the last Batman film I saw at the cinema until Nolan took over, thus I helped in its financial success. If only I’d known....

Director Joel Schumacher took the reins and undid all the good work set up by Tim Burton. His first foray upped the comic book look of the film, it was bathed in vivid colours and sported askew framing...

In its LaserDisc and DVD days, Batman Forever was one of this reviewer's favorite demo titles for its multichannel audio, notably the way the opening titles swoop towards the screen, scream from one channel...

Batman Forever's UHD disc contains only a legacy commentary track with Director Joel Schumacher. The included remastered Blu-ray has that track in addition to all of the supplements that Warner Brothers...

Batman Forever...yeah. It's not awful but it's also a shell of the Burton films, even the lesser Batman Returns. It's too much style, and that style doesn't bring a particularly good aesthetic with it,...

It’s important to note that the ultimate goal for any release on home video is to present a film in the highest possible quality based upon its original elements. Batman Forever and Batman & Robin have...

When compared to the 5.1 channel mixes, the immersive sound offers a noticeable improvement by opening up the soundstage, elevating the perception of low-level detail. During the various encounters/action/interior/exterior...

Batman & Robin: Batman & Robin is the sequel to 1995’s Batman Forever and is the fourth and final installment of Warner Brothers initial Batman film series. Set two years after the defeat of Two-Face and...

The results on both standard Blu-ray and Ultra HD Blu-ray are terrific, delivering faithful and rewarding video quality that is sure to please discerning enthusiasts. Additionally, each film includes updated...