Quantum of Solace has an improved UHD video presentation over its Blu-ray counterpart, but it still lacks image quality and dynamic range. 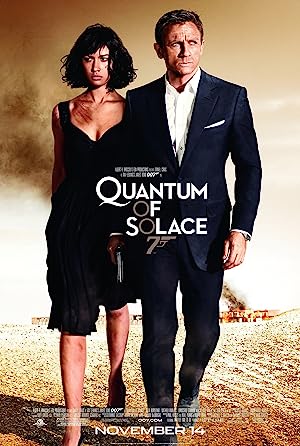 MGM's UHD release of Quantum of Solace offers minor improvements, but is overall flawed by stylistic choice and over-processing.

The Quantum of Solace Blu-ray has been released with the same DTS-HD Master Audio 5.1 track as in previous releases, despite the standard practice of having Dolby Atmos or DTS:X for UHD films.

The UHD disc of Quantum of Solace contains no supplemental content, while the bundled Blu-ray disc is identical to the 2009 issue and includes all of the legacy Blu-ray content.

The 2008 James Bond film "Quantum of Solace" directed by Marc Forster and starring Daniel Craig is highly acclaimed for its efficient use of every frame.

Plot: James Bond descends into mystery as he tries to stop a mysterious organisation from eliminating a country's most valuable resource.

Something of an upgrade, more significantly flawed by stylistic choice and a simple matter of over-processing

The exact same DTS-HD Master Audio 5.1 track that fans have been enjoying for the last decade

Nothing new, and nothing on the 4K disc itself

Watched immediately after Casino Royale, effectively taking the 2.5 hour story and turning it into a 4 hour epic, and you have an absolutely blistering chase movie finale

MGM's UHD release of Quantum of Solace offers minor improvements over the decade-old Blu-ray: some negligible, some a little more obvious, most falling firmly in between. The picture's grain structure...

With some exceptions it's standard practice for studios to release films -- new and not-so-new -- to the UHD format with either a Dolby Atmos or DTS:X soundtrack. Quantum of Solace is one of those exceptions....

Quantum of Solace's UHD disc contains no supplemental content, but the bundled Blu-ray, which is identical to the 2009 issue (including the needlessly cumbersome menu), brings over all of the legacy Blu-ray...

Quantum of Solace's UHD video presentation shows improvement over the aged Blu-ray, but it also shows a number of shortcomings where the image screams for more of an overhaul. It's a flat, uninspired UHD....