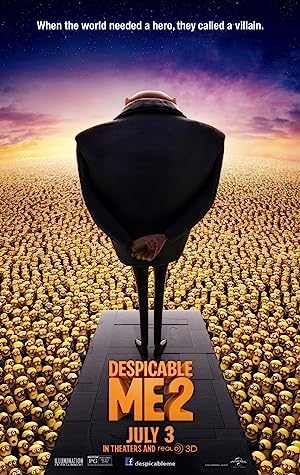 Plot: When Gru, the world's most super-bad turned super-dad has been recruited by a team of officials to stop lethal muscle and a host of Gru's own, He has to fight back with new gadgetry, cars, and more minion madness.

Despicable Me 2 and it's predecessor were always reference discs on Blu-ray, and so it's unsurprising that, just in time for the release of the third movie at the end of the month, we're getting to see...

Despicable Me 2 comes complete with an immersive DTS: X audio track centered on a fabulous DTS-HD Master Audio 7.1 core, which is stunning in and of itself, remaining largely demo and reference quality...

Despicable Me 2 cements the unstoppable popularity of Gru, his kids and his Minions. Cleverly developing the interaction between once super-villain Gru and his adopted girls without having to resort to...

It's a decent enough package, if a little light As with the first release, the Ultra HD Blu-ray release of Despicable Me 2 doesn't port over all of the extras from the 2D Blu-ray disc, but instead mirrors...

To this point, Universal's animated films to feature on the UHD format haven't really proven all that interesting, failing to really differentiate themselves from their 1080p Blu-ray counterparts in any...

Despicable Me 2 bumps up to a DTS:X Master Audio soundtrack from the standard Blu-ray's DTS-HD Master Audio 5.1 lossless presentation. Much like the move from one to the other on the first film's UHD release,...

Despicable Me 2's UHD debut contains no new bonus content, but the UHD disc does include the Renaud/Coffin audio commentary track as well as the three mini-movies -- Puppy, Panic in the Mailroom, and Training...

Universal has released the smash hit family-favorite film 'Despicable Me 2' to the UHD format for the first time. The film now boasts 2160p and HDR-enhanced video along with a new DTS:X Master Audio soundtrack....

Despicable Me 2 is the obligatory sequel that made the obligatory massive amounts of money for Universal. The franchise shows absolutely no signs of slowing down and a new movie is right around the corner....

Gru and the girls battle villains, boys and mutant minions with a marvelous, eye-catching HEVC H.265 encode in Dolby Vision that defaults to HDR10 if you don't have a Dolby Vision capable display & player...

Our favorite villain with a heart of gold fights bad guys with the latest new fandangled toy, a wonderfully energetic DTS:X soundtrack that brings the stunning visuals to life. Much like its 5.1 DTS-HD...

The same set of supplements are ported over and can be found on this release's Blu-ray disc, save for the Audio Commentary and Mini Movies, which are also available on the Ultra HD Blu-ray in 4K and HDR10.Audio...

What made Despicable Me such an entertaining surprise in 2010 was its unpredictability. The story of a Bond-like super villain adopting three orphan girls as part of a larger scheme to steal the moon offers...

Gru, his Minions, and the girls return for another adventure battling supervillains in Despicable Me 2, which also introduces fans to two new and fairly funny characters, Lucy the spy groupie and El Macho....