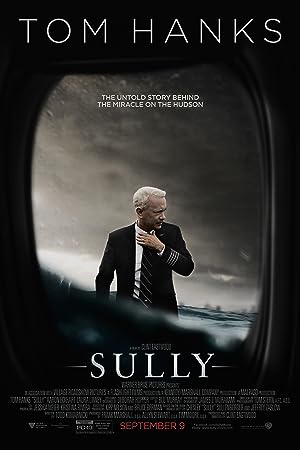 Plot: The story of Chesley "Sully" Sullenberger (Tom Hanks), an American pilot who became a hero after landing his damaged plane on the Hudson River in order to save the flight's passengers and crew.

Sully: The Miracle on the Hudson was filmed digitally using Arri Alexa 65 cameras, with a resolution of 6.5K and finished using a 4K Digital Intermediate (DI), meaning we’re seeing the full native resolution...

Simon Crust reviewed the Dolby TrueHD soundtrack on a 5.1 system – Much the same can be said for this demo quality surround track whose reliance on ambience and ‘reality’ make for an emotive, engaging...

The extra features are all found on the included Full HD Blu-ray: Sully Sullenberger: The Man Behind the Miracle – A twenty minute biography of Sullenberger himself, a unremarkable man who did a remarkable...

Everything is unprecedented until it happens for the first time Sully: The Miracle on the Hudson is director Clint Eastwood’s retelling of the remarkable events that unfolded on January the 15th 2009 when...

On 15 January 2009, America West Airlines flight 1549 was forced to ditch in the Hudson River in New York after suffering catastrophic engine failure; Sully: Miracle on the Hudson is director Clint Eastwood’s...

Sully joins the still-too-short list of 4K discs sourced from 4K digital intermediates, but it hasstiff competition from the standard Blu-ray presentation, which is excellent. In direct comparison, Warner's...

As usual, the 4K disc has no extras. The accompanying standard Blu-ray has the extras listedhere....

IMAX Manqu�Warner Brothers has missed an opportunity with its UHD rendition of Sully. The film was releasedto theaters in two aspect ratios, 2.39:1 for standard projection and 1.9:1 for IMAX presentation,...

Sully's UHD rendition offers a small but noticeable upgrade over the Blu-ray, but the Blu-ray isso good that anyone who chooses to stay with 1080p should not feel deprived. Now, if Warnerever decides to...